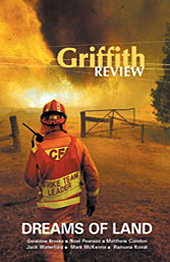 No news - farmer prospers in drought

THERE HAVE BEEN so many droughts in Australia since European settlement that it's a wonder they command so much broadcasting time and media space. Good farmers recognise that managing and surviving drought go with the occupation. In the good years they put aside cash in off-farm investments or in the relatively new farm-management deposits, they use sensible stocking rates and, where possible, devote sections of their properties to trees to prevent salinity.

Such farmers are not news worthy. The media prefer the heartbreak stories of sheep and cattle starving in bare paddocks and stories of demands from the bush for taxpayer-funded assistance. No one is so heartless as to want to deny hungry and heartbroken farm families emergency aid but we may ask why they are any different from city families who go on welfare when unemployment and illness strike. Why do they need special assistance? We may also ask if farmers are different from the small-business operators who find that Woolworths or Coles stores have opened up nearby and trade from dawn to midnight every day. No one notices or cares when they are forced to close shop and move on.

Farmers are adjusting to changing economic circumstances of their own volition; they are getting out or getting bigger. The Australian Bureau of Statistics (ABS) reported recently that at June 30, farmer numbers were 135,000, down from the 181,600 of 20 years ago. The ABS said farms were bigger because of amalgamation, a worldwide trend. Bigger farms could achieve economies of scale and be better prepared to combat drought, the bureau said.

Few people today believe that Australia can be drought-proofed. Last year, when radio personality Alan Jones resurrected the hoary old plan to turn coastal rivers over the range to drought-proof the inland, he was met with such derision that he backed off. The plan of business magnate Dick Pratt to move all irrigation water through pipes to prevent evaporation was better received but overall most Australians now accept that drought is a feature of rural life and farmers should operate in such a way as to minimise its impact. We cannot get rid of it even by spending billions of dollars on diverting rivers and laying pipes.

The 20th century, like the one before it, started with severe drought and farmers have rarely been free of the threat of it. Figures for NSW show that there were 14 droughts in the 19th century and 10 in the 20th, with the "big dry" from 1973 to 1983 declared by many as the worst ever. Every mainland state has suffered frequent drought.

Scientists and meteorologists have always had problems forecasting drought but the discovery of the El Niño phenomenon has improved the chance of predicting the approach of a dry season and the end of it. However, the forecasters also have other factors to consider, notably global warming and pollution.

Research by Dr Neville Nicholls of the Bureau of Meteorology Research Centre in Melbourne indicates that during 2002, global warming increased the severity of drought by raising the rate of evaporation of water in dams, farm water storages and streams. Warmer temperatures also reduced available soil moisture and irrigation efficiency, further aggravating the impact of drought. According to Nicholls, the greenhouse effect is starting to take its toll on the bush. The 2002 drought was considered by many as one of the worst on record. But rainfall during the period was not the lowest recorded and the finger of blame is pointed firmly at rising average temperatures.

In many things scientific there are disagreements. From the Cooperative Research Centre for Greenhouse Accounting at the Australian National University comes a report indicating that evaporation rates are declining. Michael Roderick and Graham Farquhar say that as the average global temperature increases, it is generally expected that the air will become drier and that evaporation will rise. But observations over 50 years show the reverse. They show a decrease in evaporation consistent with large and widespread decreases in sunlight resulting from increased cloud and aerosol concentration.

More evaporation or less? Both theories imply that climate change is adding to the problems of farmers coping with dry spells. The first theory means less water and drier soil and the second, lower solar irradiation. Both could reduce farm incomes.

WHICH EVER WAY you look at it, the question of managing drought is becoming more complex. A lot of this results from the way the early settlers saw themselves as farmers in the European tradition. Europe is not a dry continent with frequent drought but one that is wet and replete with rich, productive soil.

To many environmentalists it appears that we have learnt little from past droughts. They find it galling that each new drought is treated like a rarity rather than as a natural phenomenon. One reason the impact of drought is worsening is because agriculture is becoming more intensive, more capitalised and the rip-and-burn mentality still prevails over many parts of the nation. This is especially true in Queensland where any perceived threat of state government action to restrict land clearing brings a crescendo of trees crashing.   It appears that more trees are being cut down than are being planted despite the long-running Federal Government-financed planting campaign.

Greater land clearance increases the risk of soil erosion and rising salinity both in paddocks and streams. Over recent decades agribusiness has been gobbling up water from outback streams to grow massive crops of cotton and grain. Because they provide employment and use local contractors, the companies usually get community backing and virtually defy state governments to take any water from them.

The bitter fight over water rights in the Murray-Darling Basin between traditional irrigators, new irrigators, communities and the environmentalists who want more water returned to streams than taken out will intensify unless sensible solutions can be found.

IT IS WISE to encourage farmers to look after themselves and the better ones have done this by stocking conservatively and investing in farm-management deposits that attract no tax when made and little or no tax when withdrawn in hard times. In the 2001-2002 financial year, the deposits amounted to some $2 billion. The lost tax is a gift from taxpayers but this is not enough for the farm lobby which demands more from government and uses the media to further its cause. Much of the deposit funds were not withdrawn when drought hit, indicating that good farmers do not need handouts.

Yet, after drought assistance became more generous and more immediately available in September 2002, the handouts increased. More than 11,000 farm families had received Commonwealth drought assistance up until May this year as income relief and two-year interest deferment for loans up to $100,000. More than $110 million was made available and such relief has continued into this financial year.

The frequent occurrence of drought has generated a handout mentality, whereby there is an unholy rush by rural shires to be "drought declared" and the victims of "exceptional circumstances". To succeed is to attract taxpayer-funded drought relief to the farmers of the shire. The exceptional-circumstances scheme is supposed to be restricted to providing relief for farmers when income calamities occur every couple of decades. But the designers of the scheme did not count on the emotion generated by the radio "shock jocks" and tabloid journalists putting pressure on the federal and state governments to dole out more money to the most cash-strapped farmers, many of whom should not be in the industry.

The Federal Government has adopted the policy of providing income support and interest-rate subsidies while regions are awaiting decisions as to whether they are in exceptional circumstances. The message seems to be that poor management will be rewarded.

There have been many ad hoc responses to drought over the decades by politicians with the ballot box in mind. Malcolm Fraser's 50 per cent feed subsidy introduced in the 1970s virtually doubled the price of grain and made life tougher for livestock producers. Drought relief has done little to boost production or to make better farmers but it has kept people on the land who would be better off in some other industry. If they were forced out, the good farmers could buy up their land to become even more productive.

POLICIES THAT ARE a response to emotion generated by the media are useless and costly. The best drought policy is not one that provides handouts but rather, ensures that farm families in need are made aware of, and given access to, all the welfare benefits available to all Australians.

The agriculture industry excels at spreading gloom about its future. I can understand the Hanrahans emerging in hard times declaring "we'll all be rooned" but the truth is that most have survived drought and low prices for a couple of centuries and will continue to do so. What many farmers and their leaders fail to realise is that every industry, including agriculture, needs a high degree of confidence to keep up investment levels, innovation and, very importantly, a regular transfusion of new blood to run farms and work on them.

Farming is basically a greying occupation of people with little formal education. Farms are getting fewer but bigger and more are using modern technology that requires trained people to make full use of it. In good years there is an unfulfilled demand for skilled staff – a predicament that is fuelled by parents discouraging their children from entering agricultural colleges because the gloom merchants have convinced them there is no future in the industry. With every drought the gloom deepens and the commentators ignore the many success stories. With the abolition of agricultural support schemes and fixed prices, an entrepreneurial spirit has emerged in the bush and this shows up in the trade figures. For example, the dairy industry used to attract a production bounty to produce surplus produce that was sold abroad at a loss. Today it is a big export winner because of larger, more productive farms. The wine industry has no government props and it is a success story.

Farming is a business, not a way of life, and the more it is seen as such the better for farmers and the nation. And, as business operators, farmers should expect to pay a price for water that includes all delivery costs. If they did, that water would be used wisely.