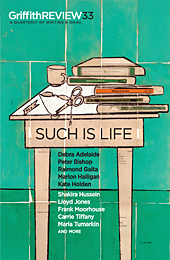 A NEW MALE human being entered the universe a year ago, with one-eighth of his genetic material identical to my mother's and one-eighth identical to my father's. Those millions of delicate fragments of code, assembled around a hundred years ago, were duplicated perfectly, then duplicated perfectly again and finally copied into a microscopic drop of cell matter, to begin yet another voyage through space and time and consciousness with its own unique human identity. It is a mystery, to me. But tens of thousands of mysteries like that happen every day.

Within a hundred years the billions of molecules that make up this lively, cheerful, noisy creature will disperse and never reassemble again: except for that tiny fraction that may end up in another human's genetic make-up to travel down the centuries, mixing with other genetic material and incarnating again and again.

The need to mate and produce children is hard-wired in us, like the need to eat and drink. Without that permanent universal instinct the human race would have become extinct before it had become human.

Human infants, unlike the young of most other animals, are vulnerable for many years after they are born. The function of the family is to protect and nurture children through that period. Family is older than humanity, and has nothing to do with any particular society, culture or religion.

The separate and very different instincts to mate and to nurture children are both essential for the survival of the human race. It seems to me that there is no philosophical, social or moral meaning – or any real purpose– behind this. It's just that without this complicated mix of instincts and social structures, there wouldn't be anybody here to talk about it.

In most societies the instinct to mate and thus to breed results in sexual desire, love and bonding, which results in family, and family eventually makes possible what we call civilisation. In Civilization and its Discontents (1931) Freud says that civilisation is 'a process in the service of Eros, whose purpose is to combine single human individuals, and after that families, then races, peoples and nations, into one great unity, the unity of mankind. Why this has to happen, we do not know; the work of Eros is precisely this.'

Nations, yes; but sadly the unity of mankind remains an illusory hope.

THEORY IS FINE, but what we think about family is conditioned by our experiences growing up within our own families. My father, Frederick, has been dead for most of my life. I still dream about him, from time to time, but less now that I have become older than he ever got to be: he died at forty-eight.

He was born in Rylstone, in country New South Wales, in 1914, the youngest of five children – three other boys and a girl. His father was a wheat farmer, and when my father was a baby his parents gave him away to his aunt – his father's sister – to bring up, in Moruya, a coastal dairying town three hundred miles away. Aunt Em was childless; she was a nervous, anxious woman.

My father hardly ever saw his real parents. People didn't travel as much then, and the highways were mostly corrugated dirt roads, dusty in the heat and muddy in the rain. In the 1920s his parents may have had a tractor, or perhaps a truck to help with the farming, but I doubt they had a car to drive about in.

And after all, they hardly knew the boy.

As a boy he must have been a rather sad figure, as I see him, with few friends. He studied hard at school, and won a scholarship to a state-run agricultural boarding school at Yanco, near Leeton in central-western New South Wales, three hundred miles away from both his real parents and his adoptive parents. He graduated with a teachers' college scholarship, trained, and taught at a small school at Bodalla, twenty miles from his childhood home. He met the mother of two of the children at the school. Her husband had left her years ago, and she and her boy and girl were living at home with her parents. Her father was an important man in the district, the manager of the Bodalla Company, a large and wealthy dairy farming co-operative.

My father married her. Soon he was transferred to a one-teacher school at Bredbo, a tiny hamlet on the Southern Highlands, where I was born.

After five years my father managed to get a transfer back to his home town of Moruya. The school was much larger, with a dozen teachers, and took children from all around the district. My father loved teaching, and was good at it, rising to be deputy headmaster. But he was also driven by a need to have a farm. He saved his money, borrowed some more money and bought a farm, but before long was asked to choose between his teaching career and the farm. If you were a schoolteacher, you couldn't have another job. He chose farming, and gave up teaching.

A business partnership with a distant relative followed, allowing him to buy another farm, then an adjoining farm, then an abandoned cheese factory, which was soon converted into a soft-drink factory. The farms did okay in the good seasons, and badly in the bad seasons; I remember a terrible flood that washed away the only bridge into town, and one summer there was a savage bushfire that destroyed and blackened the bush for fifty miles around our house, but the house was spared. And the soft-drink factory did well; it's still doing well, over fifty years later.

My father was a kind man. As a teacher he was loved and remembered. He seemed to care especially for disadvantaged children, offering them patient encouragement and help. But he was always preoccupied, and he never said much to me about what he was thinking or feeling. He was driven by a particular purpose, but I only worked out what his motives were in my forties, when he'd been dead for twenty years. These insights came slowly, by adding things together, and I wonder whether he was ever conscious of what drove him so hard.

I came to realise that he wanted to show his father – his distant father, the father he loved but hardly knew, who had abandoned him – that he had done well at last, that he had learned agriculture, passed his exams and made good as a farmer, just like him. He was worthy of being loved. When he was about forty years old and business was going well he took a breather, and invited his parents – his real parents – to visit.

How long did it take them to travel the three hundred miles from Rylstone? A couple of days, perhaps, over the mountains, through the silent empty bush. I dimly remember them as a pair of shy strangers – the man tall and thin and grey, the woman plump and grey – with nothing much
to say.

In my memory I have a picture of the two men, my father and my grandfather, leaning on our front gate, staring at the landscape. The hills there are covered with thick eucalypt forest; the bush stretches to the west, virtually uninhabited, for hundreds of miles. A leaden river crawls along the valley floor far below. The sky is a hard blue. The sun burns down. In this memory picture they are just staring, not saying anything.

What is there to say?

My mother was raised in Bodalla, a coastal country town. She was a shy woman with a pleasant, diffident manner. She had hardly any friends, except for her family. In her twenties she had married a journalist and went to live in Sydney. Her husband had been in World War I and drank too much as a result of what he had seen and lived through. They had two children, a girl and a boy, and then her husband disappeared on a drinking binge and was never seen again. She somehow raised the children, then met my father and married when her children were in their early teens. She was forty-one when I was born, in 1943.

Many years after she died in her eighties, I discovered that it was not her first husband who had left her; she left him. She went home to the country, taking the children, and they lived in her parents' house. She found a job as a telephonist and they somehow survived, partly on her salary and partly on the charity of her family.

Her husband visited them at one point, but didn't stay long, and left. I wonder what he said to her. That he was sorry for his drinking, I suppose. And the children – how could he explain to them how or why his life, and their lives too, had fallen to pieces in his hands? I see him getting on the bus back to Sydney, a battered suitcase in one hand, his ticket in the other, blinking in the early morning sun, hungover again.

Then he disappears, forever.

I DREAM A lot about little children. They appear out of the dark, and they smile at me, that smile of pure exhilaration that only babies have, and they hug me around the neck. I need to protect them, to make sure they're safe and well.

I'm half awake. From the kitchen I can hear sounds of my mother preparing breakfast. Somehow I'm a young boy again, at home, in my bed. The sun's just coming up, shining through the curtain. Outside, in the valleys of deep bush, parrots are calling to each other. Everything is all right; everyone is alive.

When I wake up the children are gone. I think about distance, about being far from home, about wanting to leave and wanting to return, that exhausting action we call travel, or flight, or escape, or adventure, or homecoming. I see a boy grow into a man. I see myself fading back into the past, a once-familiar country that has grown strange and distant, that has somehow been obliterated. The farm is not there any more. My parents have been dead for decades. The house is empty.