On 'Don't Take Your Love to Town', by Ruby Langford Ginibi 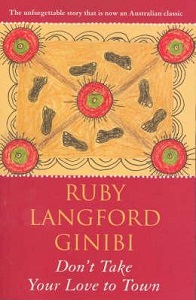 IN 1988, DON'T Take Your Love to Town became the first of five autobiographies that Ruby Langford Ginibi would have published during her almost thirty-year career as a writer, Aboriginal historian, activist and lecturer. Indeed it was this first book, her life story covering five generations of familial bonds, written in what would become her trademark conversational style, which would have a historic impression on Indigenous literature in Australia. Don’t Take Your Love to Town proved the catalyst for Langford Ginibi achieving recognition as one of Australia’s premier storytellers of urban and rural Indigenous life during the last half century.

Ruby Langford Ginibi was born Ruby Maude Anderson on 26 January 1934, at the Box Ridge Mission near Coraki, a small town on the Richmond River in the Northern Rivers region of New South Wales, home to the Bundjalung people. She took the surname Langford after her marriage to Peter Langford, the father of two of her children, and after the book’s publication in 1990 was given her tribal name Ginibi, meaning ‘black swan’.

Despite being abandoned at the age of six by her mother, Langford Ginibi paints childhood as colourful and heartfelt, and it is in recalling this time that she shows her natural ear for phrasing – whether it be writing swiftly through heartache, or holding on to a scene just long enough for the reader to know she’s adept in the emotive power of grammar. On closing a chapter, she writes of herself as a young girl being asked by her visiting father to collect his shaving gear from his suitcase, where she finds a photograph:

I stared at the photo and then turned it over. The words said, You are my Sunshine, love Evelyn. Dad came in with a towel around his neck and said ‘Haven’t you found my shaving gear yet?’ When he saw the photo I said, ‘Is that our mother?’ ‘Yes,’ he said. I stared at the picture. ‘Isn’t she beautiful,’ I said. ‘Yes,’ he said. ‘She’s very beautiful.’ He closed the lid of the suitcase.

She attended school until the age of fifteen, and achieved high grades. When she was offered a scholarship to study at a teachers college by the former Aborigines Protection Board, her father declined due to the backing of the board*. Ruby went on to work as a house cleaner and chambermaid before moving to Redfern, inner-city Sydney, to start as an apprentice machinist. She had nine children to four different partners, and writes in great detail about her work as a labourer alongside her partners – seasonal work in remote locations – and her subsequent time alone raising the children when those relationships fell apart. In Don’t Take Your Love to Town, Langford Ginibi recalls a life of tremendous difficulty and stress, but always with a sense of unflappability: ‘We never had permanent jobs or houses, so we were always thinking ahead to when this one would pack up and always feeling a bit insecure.’ Such dire situations are met with a stubbornness not to wallow that can be disconcerting for the sensitive reader; however, I believe this to be an expression of the true nature of the woman rather than an attempt to keep a safe distance from a painful past. Certainly, she would not have survived the life she documents had she been overly sentimental. There is no hesitation in the retelling of her capacity to survive as a woman, and this comes across strongly in her writing as the tool most at her disposal: the ability to record a personal history with unflinching truth.

The succinct way that Langford Ginibi humanises the countless family and friends she shares her life with is what propels the reader forward, often through the torrent of chaos that they both endure and enflame themselves. Ruby has empathy for the people she documents and for her younger self, keeping them accountable and concrete without ever compromising the truth. Much of the anguish experienced by the people she comes across can, I think, be attributed to the sense of dispossession they live with, and the resulting restlessness that grows among family and friends. As she recalls early on, after learning of the death of an elusive relative:

The girl went away and I sat down next to the grave and I stayed there a long time, until it got dark. Remembering Uncle Ernie, what a good mother he was, what a big jovial fellow, and then feeling sorry that in the ways of our people moving around I hadn’t seen him for so long.

The normalcy of displacement is knowledge to young Ruby. Later, she feels this disconnect as a mother raising her many children alone in the bush without support: ‘I felt like I was living tribal but with no tribe around me, no close-knit family.’

The historical setting of Langford Ginibi’s life is pertinent; the social context of Australia at the time massively impacted on her sense of place in society, and the eventual growth of her political and cultural awareness. Langford Ginibi grew up during a period when children were still being forcibly removed from their families. She would have been fourteen years old when the Commonwealth Citizenship and Nationality Act first assigned a category of ‘Australian Citizenship’ to all Australians, including all Aboriginal people; twenty-eight when the Commonwealth Electoral Act was amended to give the vote to all Aboriginal people; and about thirty when she established connections with Aboriginal groups, and recalls attending her first meeting of the Aboriginal Progressive Association (APA), where she met urban Aboriginal activists Charles Perkins and Lester Bostock and was elected editor of the Association's newsletter, Churringa. She was thirty-two when stockmen and women at Wave Hill walk off a cattle station in protest against intolerable working conditions and inadequate wages. The Commonwealth Referendum passed the following year, putting an end to constitutional discrimination and subsequently including all Aboriginal people in the national census. Around this time, Langford Ginibi and other members of the APA attended a traditional dance performance at the Elizabethan Theatre in Newtown by an Aboriginal group from Mornington Island. The dance spoke to her deeply, and she went backstage with other APA members to meet the performers. This was a time when Indigenous peoples were becoming more vociferous, and finding ways to reimagine their identities through visual arts, dance, theatre, film and literature.

Langford Ginibi’s empowerment resulted from this progressive period for Indigenous people, but she met with its antithesis when confronted with the criminal justice system. When Don’t Take Your Love to Town was being written, there were calls for a Royal Commission into Aboriginal Deaths in Custody (which would eventually commence the enquiry during the book’s publication). The final chapters of the book deal with these issues, spurred on by Langford Ginibi’s son, Nobby, being wrongfully convicted of firing a weapon at a police vehicle and sentenced to ten years prison at age eighteen. After his initial arrest, she notes the commonness of police brutality in writing: ‘I went to see Nob in the cells and he had two black eyes. We knew what this meant.’ It is during the following years in the book, when more of her children are incarcerated, that she realises the disadvantages experienced by herself and those around her are not by chance. Here she becomes a staunch social activist, investigating Aboriginal injustice by examining those immediately around her and drawing on her experience and research. She succeeds in chronicling her observations without being didactic, presenting sound evidence and noting media reports to document inflated incarceration rates and the rise of Aboriginal deaths in custody. At this point the book becomes a different sort of memoir, one footed in her life at that moment, describing the immediate external and internal struggle she faced.

When reading Don’t Take Your Love to Town, I was swept up in the immediacy and contemporary nature of the Aboriginal experiences being depicted. At times I would skip back to the publisher’s page and Langford Ginibi’s biography, to check that she was still writing about Australia in the ’60s, ’70s and ’80s; the issues she deals with – Aboriginal incarceration rates, deaths in custody, ingrained social racism, and the innate feeling of isolation – are still highly present in the Australia of today. Indeed, according to the Australian Bureau of Statistics, in the decade from 2004–2014 one fifth of all people incarcerated were Aboriginal and Torres Strait Islander, despite their representing only 3 per cent of the entire population. In 2014, the death in custody of two Aboriginal people in three months sparked widespread outrage, which culminated in fiercely emotional protest at the G20 Summit in Brisbane. Then in 2015, amid the constant reiteration of old and new issues that have seemed insoluble for Indigenous communities, the federal government took actions to cut and redistribute vital funding for Indigenous projects.

A year before the book was published, another Aboriginal autobiography was released – Sally Morgan’s My Place (Fremantle Arts Centre, 1987). Morgan’s book became the standard of comparison for the majority of Aboriginal autobiographical works that followed; however, it differs greatly from Langford Ginibi’s. Morgan was told that her family was of Indian background, only discovering in her teens that she had Aboriginal ancestry on her mother’s side. This discovery motivated research into her family’s history, and culminated in the writing of My Place. Langford Ginibi, on the other hand, is never in doubt about her racial identity. Her autobiographical narration of Don’t Take Your Love to Town doesn’t involve the process of discovering her Aboriginal heritage, although her story does address the changes in identity across time and place, between urban and non-urban lifestyles. The telling of Don’t Take Your Love to Town is powerful in itself as a chronicle with no specific allusions of self-discovery. This is not to say Langford Ginibi wasn’t searching for something, but the nature of that something alters as she and the Australia she knows alter too. Ultimately, though, her quest is for home, the universal home we all seek – one of safety, stability and family.

As if aware of the breadth and often manic unfolding of her story, Langford Ginibi writes with a condensed, simplistic style that is almost paratactic in its structure, and forces the reader to go slowly. She has embedded larger, recurring themes in this sparing account of her life, which are developed and given context through the chronological framework that holds the entire story together. As a reader I found the passages on grief, alcohol and drug abuse most difficult to read, simply because of the way Langford Ginibi depicts these issues so accurately. Understandably, she made mistakes as a parent, but the Ruby of this book is firmly grounded, and time and again she returns to the caring and loving matriarch that is her natural state.

In an interview before her death in 2011, Langford Ginibi stated that telling her life story ‘ripped the guts out of me’, and any empathetic reader knows this to be true. What Langford Ginibi produced in penning Don’t Take Your Love to Town was a broad-scoping segment missing from the body of Aboriginal literature, published in 1988 amid the fanfare and patriotic celebrations of Australia’s bicentenary. Decades later it retains its relevance and importance, still sounding a clarion call to the future for understanding and a breaking of the cycle of social and racial disadvantage for Aboriginal Australians, at long last.

*The Aborigines Protection Board was the main NSW state government agency responsible for implementing and administering the laws and policies affecting Aboriginal people in NSW from 1883 to 1969. The policies of the Board controlled most parts of Aboriginal people’s lives, from the removal of children, access to health, education, employment and housing of Aboriginal people on stations and reserves.