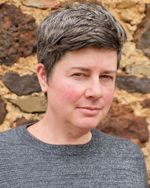 Sophie Cunningham has been on the publishing scene in Australia for thirty years. She is a former editor of Meanjin; was, from 2011 to 2014, chair of the literature board of the Australia Council; and is a founding and current board member of The Stella Prize. She is the author of two novels, Geography (Text, 2004) and Bird (Text, 2008) and, two books of non-fiction, Melbourne (UNSW Press, 2011) and Warning: The Story of Cyclone Tracy (Text, 2014). She is an adjunct professor at RMIT University in the School of Media and Communication's College of Design and Social Context.

How to draw a tree
Edition 63: Writing the Country