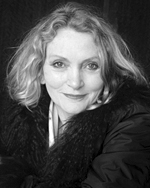 Multi-award winning Australian author Robyn Davidson was born in 1950, on a cattle property in outback Queensland, Australia. In 1977, she travelled alone with camels across 1700 miles of Australian desert. The story of that journey was first published in National Geographic and later became the book Tracks which was subsequently translated into 16 languages and was a best-seller in ten counties. Robyn is the only women to win travel literature's prestigious Thomas Cook Travel Book Award.

Robyn's other books include Travelling Light, a collection of essays, Ancestors and Desert Places which chronicles the 2 years she spent travelling through North West India with a caste of pastoral nomads. She is presently working on a fictionalised memoir and a book and series of documentary films on the fate of traditional forms of nomadism in the modern world.

Return of the camel lady
Edition 9: Up North

Beyond the refuge of numbers
Edition 20: Cities on the Edge