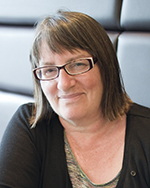 Rachel Flynn started teaching in 1974 and has continued all through the evolution of technology, documentation, auditing requirements and classroom practice.

She has published numerous picture books and novels for children (Penguin), some of which have been translated into Dutch, French, Spanish, Korean and Chinese. Rachel is also an occasional poet with occasional publications.

She has been teaching in Professional Writing Programs around Melbourne since 1995, and currently works at CAE and RMIT.

From blackboards to e-learning
Edition 45: The Way We Work