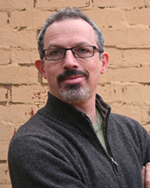 Nick Gadd is a writer based in Melbourne. His first novel Ghostlines (Scribe, 2007) won a Victorian Premier's Literary Award in 2007 and a Ned Kelly Award for best first fiction in 2009.

His writing has appeared the Guardian, Elsewhere: A Journal of Place, Eureka Street and Melbourne Subjective, among others. His essay 'The unconscious of the city' was shortlisted for Melbourne Writers' Prize in 2015. He will be writer-in-residence at Mildura Writer's Festival in July 2016.

'A landscape of stories' won the Nature Conservancy Australia Nature Writing Prize in 2015.

He can be found at his blog, Melbourne Circle.

A landscape of stories
Edition 52: Imagining the Future