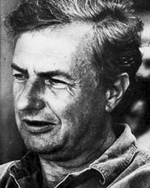 Michael Wilding was born in 1942, and is Emeritus Professor in English and Australian Literature at the University of Sydney.

His stories have appeared internationally within a range of publications and have contributed to a number of collections, including Aspects of the Dying Process (UQP 1972), The West Midland Underground (UQP 1974) and The Gift of Story (UQP 1998).

Michael Wilding is an important critic and scholar of Australian literature. He has written numerous critical studies, and edited Marcus Clarke (UQP 1976), The Tabloid Story Pocket Book (1978) and The Oxford Book of Australian Short Stories (1994).

Something better: fundamentalism, revolution, loss of faith and the future
Edition 7: The Lure of Fundamentalism

“Don’t I know you?”
Edition 5: Addicted to Celebrity