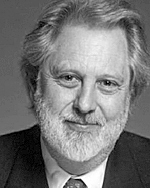 Lord David Puttnam CBE is one of the world's great filmmakers.

In 1982 Lord Puttnam received the British Academy of Film and Television Arts (BAFTA) Michael Balcon Award for his outstanding contribution to the British Film Industry.

Lord Puttnam's achievements were recognised with a BAFTA Fellowship for Lifetime Achievement in 2006.

He was chairman of the National Film and Television School for 10 years and founded 'Skillset', an organisation that trains young people for the film and television industries.

Your job is to amaze me
Edition 31: Ways of Seeing