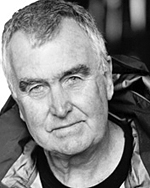 Barry Hill was born in Melbourne and grew up in a politically active working-class household. He has worked as a psychologist and journalist in Melbourne and London. Since 1975 he has been a full time writer of fiction, non-fiction, poetry, as well works for radio, stage and musical performance.

His short fiction has been widely anthologised, and some stories translated into Chinese and Japanese. He has won Premier's awards for non-fiction, poetry and essays. In the 1990s he was mainly writing history and poetry, mostly arising from fieldwork in Central Australia.

Currently he is Poetry Editor of The Australian and an Honorary Fellow at the Australian Centre and lives in Queenscliff, Victoria, with his wife, where he swims a lot, practices karate and tries to be a Buddhist.

The uses and abuses of humiliation
Edition 48: Enduring Legacies

A letter to my father
Edition 19: Re-imagining Australia

Poems that kill
Edition 7: The Lure of Fundamentalism

Getting to grips with naked
Edition 22: MoneySexPower