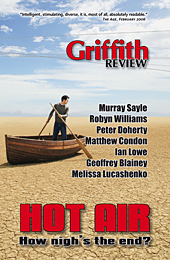 JØRN LOMBORG FLEW to Australia to provide "balance". In October 2003, just as the Kyoto debate was cranking up in Australian Parliament, and just as the world's largest and most rigorously peer-reviewed scientific collaboration of 2,500 experts from a hundred countries (including 104 of the 178 living Nobel Prize winners in the sciences) had confirmed the human impact on global warming, Europe's noisiest climate-change denier was invited here by the Federal Minister for Industry. This was a surprise to those who thought government's role was to respond to – rather than undermine – consensus expert advice. Lomborg, a statistician who was widely discredited in his native Denmark, flew here as a guest of the Institute of Public Affairs (IPA).

A word on the IPA. With intimate connections to United States think tanks, particularly the American Enterprise Institute (AEI), is the IPA is part of a network of agencies that US economist John Chuckman calls "phony institutes where ideologue-propagandists pose as academics". Notoriously secretive about its funding sources. it offers a more laundered approach to public relations than the "cash-for-comment" deals we've learned to recognise. IPA staff enjoy four newspaper opinion columns a week around the country, as well as making broadcast appearances, citing "research" in news reports and policy-advice commissions. The content of these conform with the interests of the IPA's sponsors, which include the world's biggest energy, chemical and logging giants.

To get a picture of the intimate connections between Lomborg's visit, media reportage, government policy and the IPA's links with the AEI, consider the bizarre series of events that followed the release of Jurassic Park novelist Michael Crichton's latest sci-fi thriller, State of Fear (HarperCollins), just over a year ago.

This is a novel in which – amid cleavage and cannibalism – environmentalists scheme a global warming hoax. How? By plotting calamitous weather disruptions and killing sceptics by affixing poisonous octopi to their armpits.

To lend credibility to its plot, State of Fear contains graphs, footnotes, editorial and references directing readers to bona fide science journals. It also contains the same bogus statistics and discredited claims the carbon lobby has been peddling for the past decade. State of Fear was released in Australia to mixed critical reception; among the positive were two features by Jennifer Marohasy, an IPA staffer who enjoys frequent gigs in The Australian and other News Ltd newspapers.

To her credit, Marohasy acknowledged State of Fear as a work of fiction (albeit one that offers "an insight ... [Crichton] cares about the truth"). Her colleagues at the AEI didn't. The AEI commissioned the novel's author to address US policy-makers in a lecture entitled "Science Policy in the 21st Century". In a forum following the lecture, Crichton compared believers of global warming with Nazi eugenicists. "Auschwitz exists because of politicised science," he reportedly said, apparently oblivious of what he himself was promoting. In Australia, Miranda Devine echoed the Nazi line, writing approvingly in the Sun Herald that in the "best-selling anti-green novel State of Fear, Michael Crichton asserted that the ban on the pesticide [DDT] "has killed more people than Hitler"." Former Western Mining boss Hugh Morgan chimed in when he said, according toNew Internationalist, that he "views discussion papers from the Australian Government's Greenhouse Office as Nazi propaganda." Morgan reportedly labelled the discussion papers "Mein Kampf declarations". Andrei Illarionov, another guest of the IPA, also compared global warming proponents with Nazis, saying they employ "man-hating totalitarian ideology [like] National Socialism." His colleague, Yuri Izrael, spoke of: "the brown Nazi ideology, the red Commie ideology" and now the green Nazi ideology. "Are we going to let the genie out of the bottle as previous generations let the Nazi and Communist genies out of the bottles?"

Within a few weeks of its release, State of Fear was disturbingly prophetic. To keep the hoax of global warming alive, State of Fear's environmentalist bad guys attempt to trigger a tsunami to trick the world into fearing rising sea levels. This is a ludicrous scenario on many counts, not least of which is that tsunamis are caused by tectonic shifts. But three days after the real tsunami hit south Asia two Christmases ago, The Wall Street Journal ran an editorial implying that Greenpeace and Friends of the Earth claimed it was connected with global warming. The editorial scolded the two for being opportunists, adding that "refutation to such feverish assertions" could be found in State of Fear.

Trouble was, Greenpeace and Friends of the Earth never made any such assertions about the tsunami. As Bill McKibbon reported in the magazine Mother Jones, The Wall Street Journal erroneously used statements made months before the tsunami hit. Yet news that environmentalists were – just as State of Fear predicted – shamelessly exploiting the tsunami disaster to seed a global-warming hoax spread with viral force around the US. The quotes were repeated in carbon-lobby press releases, newspaper commentary and on Fox News.

Many think-tanks weighed in, one issuing a media release stating that "Michael Crichton should sue" environmentalists for plagiarism because they "blame the massive death toll" on global warming. A few days later, James Inhofe, the Oklahoma senator who oversaw climate-change legislation, accused environmentalists of "capitalis[ing] on the tragedy of a hundred thousand people to push a hoax like global warming". He recommended State of Fear to Congress, and President Bush's top handler, Karl Rove, promptly arranged a meeting between Crichton and the President. The two "talked for a near hour and were in near-total agreement," wrote political journalist Fred Barnes.

As TomPaine.com noted, "The president actually does appear to buy into the "scientific" arguments put forth by a writer of fiction. (The White House press corps has not yet queried whether the president also believes there are dinosaurs running about a popular theme park.)"

BUSH'S SENTIMENTS ECHOED in Australia, where State of Fear was climbing the bestseller lists in what The Sydney Morning Herald's Miranda Divine trumpeted as "another sign green-mongering is wearing thin". Global warming sceptics haven't been published in peer-reviewed journals, she explained, because of a media conspiracy that State of Fear thankfully circumvents. "Canadian scientists... couldn't get their work published by a scientific journal... all power to Crichton for bypassing the gatekeepers and going straight to the people."

Copying their US colleagues, local policy advisers also forgot it was fiction. Former Treasury Secretary and National Party senator John Stone wrote that the novel was "much more than a work of fiction ... with a strong command of real scientific knowledge". A newspaper commentator and government adviser, Stone is also a consultant with the IPA. Concurring with State of Fear's premise that lawyers are in on the environmental conspiracy, he wrote that "the more laws there are to stop people doing things [always, you understand, in the name of a good cause – think, for example, in Victoria of those anti-racial hatred laws] the more fees there will be for lawyers". Mocking California's "ludicrous laws seeking to phase out petrol-driven motor vehicles", he believes the media are also in on the global-warming hoax because "nothing, after all, sells more newspapers than a really good natural disaster".

In the course of Stone's National Observer article, State of Fear graduated from a work of non-fiction to a textbook. For folk who "take seriously all the blather about global warming and many other 'environmental' causes", State of Fear is "an easy course in appropriate scepticism" against the "veritable barrage of lies, half-truths and assertions from the national and international environment lobby", which includes The Age. It's "a tract conveying some serious messages" to arm the ignorant against the "Kyoto protocol nonsense" refuted by Crichton.

The IPA's Alan Moran concurred, writing in Online Opinion: "NGOs [non-government organisations] in Crichton's novel, as in real life, consider it perfectly legitimate to exaggerate and distort." Corporate "political persuasion [is] trivial and in many cases zero. In contrast, many non-government organisations are primarily in the business of political influence mongering." The irony of his assertions was lost. Moran heads a secretive NGO in receipt of $1.5 million annually of corporate and taxpayer funds for political lobbying. Its importing of Lomborg and other deniers, its promotion of State of Fear, its claim that "climatic disaster hyperbole" is supported by "little evidence", its cover for politicians like John Howard who said "the jury is out" on climate change, are just tactics imported wholesale from the US.

As Crichton reportedly said to Congress, "The greatest challenge facing mankind is the challenge of distinguishing reality from fantasy, truth from propaganda."

A COUPLE OF years before her death, I took my great-grandmother, Gabi, to St Vincent’s Hospital in Melbourne. She’d developed cataracts on both eyes and was finding it impossible to play bridge.

“I haff a present for you,” she said when I arrived at the door of her St Kilda flat. She fumbled for my hand and... Read more