ONCE, PUEBLO WAS a nothing city. If you get out an old map of the US, Cassie tells me, it doesn’t even have a star. It’s just a dot town in a square state, but it’s on a blue line and a red line; it’s the last place you can drink from the Arkansas. And that’s why it became the biggest water-farming district in the Midwest.

Cassie keeps forgetting she’s driving stick. We are on the I-80, and Cassie has her foot on the clutch while I shift the gears, and there is a good chance we’ll stall at 120 miles an hour. The I-80 is a highway for tourists and poor people, because if you’ve really got somewhere to be then plane flights are cheaper than ever these days. You can get a flight from LAX to Boston Logan for less than $600.

The tourists on the I-80 are mostly post-retirement, pre-divorce white people. They have milk skin and they drive like a herd of bison, nudging each other’s number plates and lowing out canned bleats. If you press your horn on the I-80 then seventy chrome-ripple RVs will press their horns back and six wide lanes will become a shoegazey B-flat lake. They are going on their great American adventure and one of them will write the next great American novel about being old and going places, and people will read about traffic on the I-80 in book clubs all over the world.

We take the exit to Pueblo and go to the first wholesaler we find. Cassie flashes her Miss Oregon smile and we buy a small palette of bottled water for half price. Our car sinks a little under thirty individually packaged 20 oz Rocky Clears.

I drive us the rest of the way to the Motel 6; Cassie reads the Rocky Clear label aloud. She says they export water in bulk. They plug semi-trailers full of it, and ex-army guys, retired trucker guys, they run it out to Wichita. Rocky Clear has the government contract to supply water to Kansas. We are proud to support our nation’s one million volunteers. These retirees are full-time heroes. After ‘heroes’, Cassie assures me, there is a tiny printed picture of the American flag, full colour, waving in the wind.

The Motel 6 has taupe walls and a taupe bedspread, and at four in the morning when Cassie wakes up to throw up, we sit on taupe tiles. I smooth my hand up and down her back, which is one of the most famous backs in America. It is perfectly tanned and delicately endless and endorsed by Sunday Riley; it arches in a tanned, endless, endorsed way as Cassie grips the edge of the toilet bowl and pushes her guts up through her throat.

‘I think she’s done,’ Cassie says, once it’s been a minute, vomit-free. At fourteen weeks, the baby is less than four-inches long. The baby made new cells as Cassie heaved, makes new cells now as she breathes. The baby is cells making cells, and in the glove compartment of the car there is a black and blur picture of these cells making cells and on the flipside is the sonographer’s number between his name and an xx.

We drive from Pueblo to Limon as the sun rises: gory and golden, a puckered hole punch in a wet weakening sky. Cassie turns the radio up. We sing along: chic punk, baby country, pop hits. The highway is lined with corn. I have heard these songs so many times that they are barbed and strung to other moments; every chorus is a clove of humid sense memory, almost forgotten.

THERE IS A Chrysler in front of us, the last forty miles to the border. A Chrysler loses half its value the minute you take it off the lot, and this guy guns it like he knows it, burns gas and money in a long hot streak. The road smells like carbon. He makes his own clouds. Eventually, he veers off to the leftmost lane and follows the signs that point to the new I-70, the one that joins up to Lincoln.

And then the corn ends.

I twist in my seat and look back. Corn grows sixteen feet high and it makes this ersatz horizon: burnished buttery gold, a mirage horizon that moves, sways by inches in the wind. Beside us now are bleached fields, still pleated with scarred crop rows. Both sides. Raw dirt is as black-baked as the road.

KOSI-FM goes mulchy, guttural, then static entirely – the signal loops do not stretch this far from Colorado. Cassie asks me to find a new frequency, and I do. This one plays LP recordings from the ’40s and ’50s, is playing ‘Miami Wakes’ right at this minute, which Cassie once sang at the Junior Miss Daisy Finals in Sacramento. Cassie asks me to turn it off, and I do. Cassie won that year.

We drive into midday. We drive until we see a Pepsi Chicken – they’re open twenty-four hours and sell lunches for less than $3, including a lemonade. This one is the exact shape and colour and size of every Pepsi Chicken we have passed since leaving Eugene; the same, even in Kansas.

Cassie and I wrap our heads in scarves. We slide on big, wide sunglasses.

Inside the Pepsi Chicken, everything is franchise-bright, fluorescent and plastic. We order two meal deals. We hunch our shoulders, tilt our heads, so it is not as glaring that we are young.

The cashier has new dentures. They glint. She asks, ‘Would you like a toy with that?’

The cashier explains that they accidentally got sent stock for the Kids’ Feast! combos. I wonder whether they tried to send the toys back and were told they couldn’t; maybe the chief executive officer is worried about temporary radiation exposure, about getting sued. Maybe they never tried to send them back. They are the only toys shipped to Kansas in the last twenty years.

We take our meals on trays and sit in a booth by the window, and outside, the vacant fields roll on.

The chicken leaves neon salt pollen on my fingers. I lick it away. Cassie wrinkles her nose – an expression that Teen Gazeonce called ‘haughty’ but that I love in a strange and particular way. Even though it ended up in magazines later, she never used it at pageants. And I guess I’ve always had this idea that if it wasn’t for the judges then it could be for us.

We get back in the car. We wind the windows all the way down and breathe in unborrowed air. There are a lot of billboards down the ex-I-70. We pass Jesus Loves You. Ahead of us, I can see the barriers in the distance. They are bulky and chemical orange. We pass John 15:13.

I stop the car. Cassie stares out the windshield. I stare at the rear-view. Behind us, the miles go slack, all the give let out, and going back becomes at once a luxe and fractured thing.

When cells divide they can divide in two ways: perfectly and imperfectly. At more than 0.5 units of absorbed radiation, foetal development may be subject to growth restrictions and malformations.

Cassie gets out first, and then I follow, a second later. Around us, the sun is setting. The sun here is gentler than any sun anywhere else in the world: gentle and gluttonous, thick over the fields and over us.

I feel warmer. It’s in my head. It’s in the viscous micro-summer of the latent afternoon.

Cassie and I walk 500 yards of former highway and then stop, and maybe this is the middle, the exact middle of the I-70, the centre of a six-lane world.

‘Do you think we’re close enough?’ Cassie asks. She glances around. ‘At least, I think it’s far enough.’ We must be at 0.5 units by now.

The baby makes new cells as we lie down on the bitumen that is filmed over with dust. Cassie drifts her hand across the space between us and twists her fingers in mine. The baby makes cells as I consider whether maybe holding hands is enough, and the only place we won’t get cancer will be our palms. New imperfect cells.

Cassie smiles at me and it is not her Miss Oregon smile. ‘She’s going to be the safest baby in the whole world,’ she says, a heatwave shimmer in her voice.

I look behind Cassie, at the space between her and the horizon, at the gut-wrenched fields, and wonder what might grow here in the next hundred years before they come back and tear it up to sow corn. 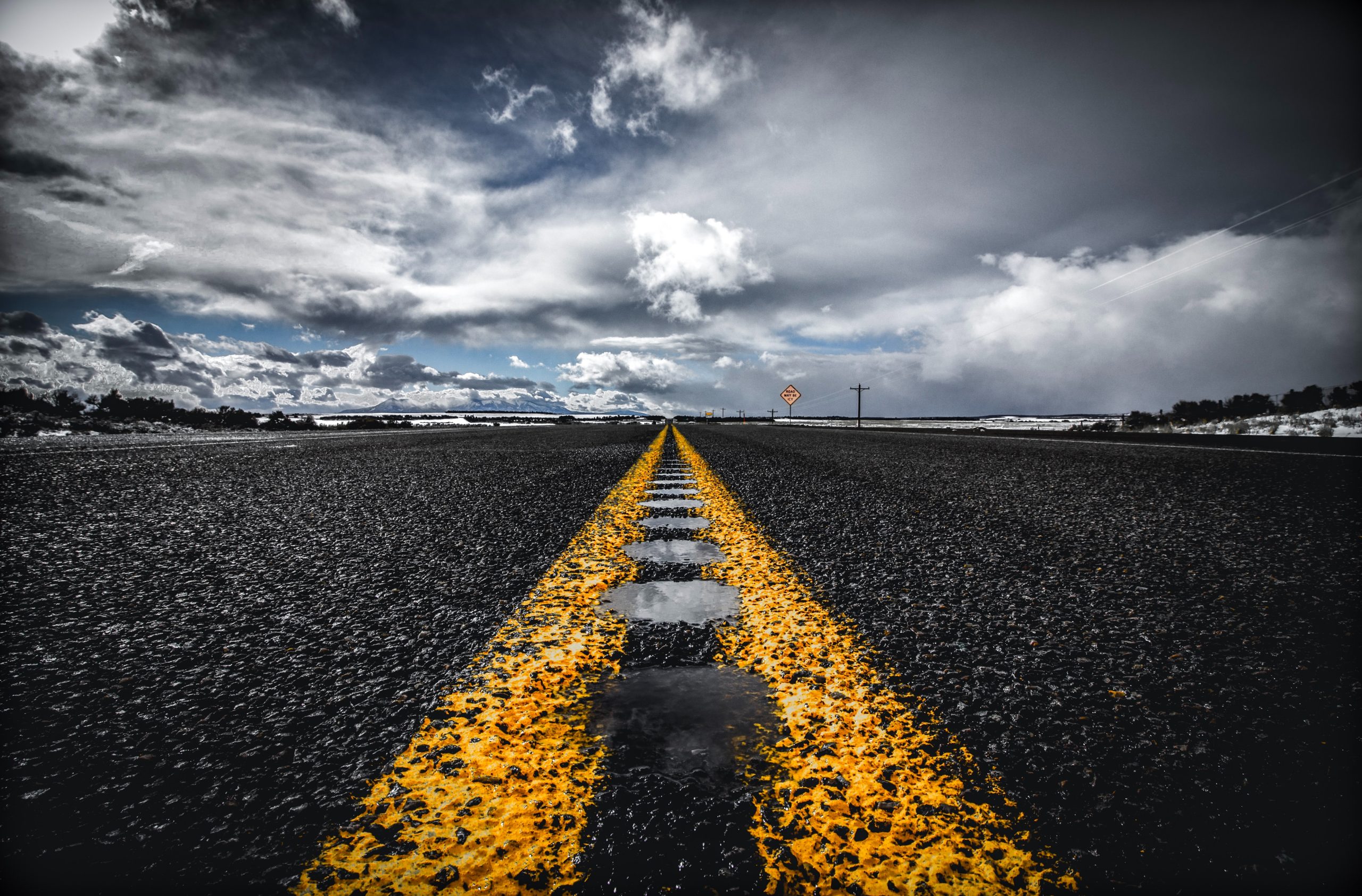 The following is the final exam paper for Unit K13. You will be asked a series of questions that engage with the key topics and ideas we’ve discussed this semester. Read each section carefully and answer the questions in the order they are... Read more