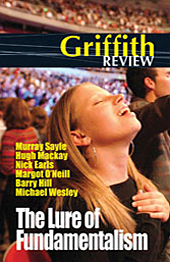 I wish to put a series of propositions about the rise of fundamentalisms – Islamic, Christian and Jewish – in recent decades. Each one's principal motive is reaction against modernity, that is Western modernity, which combines the material progress that has been generated by capitalist industrialisation and the humanist culture that framed it.

The provocation has been the nihilistic consequences of humanism, a movement that started in the Renaissance with the ambition of founding a human-centred view of existence, to replace the religious one that had preceded it. It failed to find its own answer to the great metaphysical questions that confront all humans – where do I come from, what should I do with my life, and what happens to me at death? The philosopher Nietzsche put it that with the "death of God" the truth about existence has become that life is either absurd or horrible. He satirised the modern individual as the "last man", whose only interest in life is his digestion – that is, comfort.

Nietzsche's bleak view has been projected ever since in countless works of literature, art and music, depicting the human condition as meaningless and depressive – Hamlet's "sterile promontory". The theme also emerged that if death has no sense – merely a biological event ending in rot and stink – then neither does life.

Nihilism – the belief that there is nothing – is the inevitable end point of the humanist cultural experiment. Needless to say, humans cannot live with the ultimate conclusion that this is all there is. So humanist modernity has generated a range of reactions against itself. Fundamentalism is one.

From believing in nothing there is a leap to the opposite – fanatical attachment to a body of doctrine that is claimed to be absolute and universal, the word of God himself, spoken directly through one or other of his chosen prophets. Freud would have included this reaction under his psychological category of "negation" – where fear that I believe nothing surfaces as its opposite, dogmatic assertiveness that I know the one Truth. And it is the case that people who deeply know what they know are usually relaxed in themselves, feeling no need to assert their faith. The need to convince others cloaks a need to convince oneself. It is insecurity about belief that triggers intolerant dogma as defence. Fundamentalism is a symptom of fragile faith.

To generalise the point, all churches that take to creeds and doctrine, as is their inner tendency, are defending themselves against their own lack of trust in their foundations. Fundamentalism is merely the general church orientation magnified. And, the argument concludes, the more aggressive the assertion of belief, the more insecure the foundation.

There is plausibility to the sociological caricature of anomic life in the modern city. The lonely, anonymous individual lost in the mass metropolis, with a job that brings little fulfilment, intimacies that tend to be half-hearted and fleeting, finds his or her endemic anxiety anaesthetised by a cornucopia of consumption. The restless mind may be distracted in luxury apartments furnished from Ikea and ever-new gadgets; in orgiastic sport, nightclubs and a permanent banquet of foods, drinks and drugs; in a wealth of intellectual fads supplied in the New Age supermarket. In this context, the most tempting of antidotes is certainty. In particular, what beckons is the certainty provided by belonging to a strong community with fixed boundaries, and the certainty of dogmatic, unquestioned belief.

The mainstream Christian churches, with their liberal attitudes, their tolerance of just about anybody and anything, seem like pale and ineffectual offshoots of nihilist humanism. It is little wonder then that it is Pentecostalist churches that are growing, with their combination of vital contemporary music and fundamentalist views on scripture and morals. Likewise, liberal and secular Judaism has spawned a fundamentalist reaction.

Osama bin Laden combines fundamentalist belief with a mania for destruction. His motivation is revealed in his lack of any inclination to rebuild Muslim societies. His focus is on damaging the West. His targets on September 11 were not religious sites, but the centres of American power. He has Western counterparts. In literature, the charismatic leader in Joseph Conrad's Heart of Darkness, and his reworking in the recent filmFight Club, both find their last pleasure in an orgy of destruction. The same was true for Hitler and Stalin, both products of nihilist Western modernity, who took to two secular fundamentalisms – fascism and communism.

Lewis argues that the fatal flaw in Islam has been its xenophobia, its refusal to open itself to the benefits of humanism. It has closed its mind to modern science and the entire spirit of inquiry that has driven Western progress. It has likewise closed itself off from the one cultural achievement of humanism, its positive, the Enlightenment belief in universal human rights and the practical implementation of this belief in liberal-democratic political orders.

Fundamentalisms, in general, are illiberal. In flight from humanist nihilism, they also reject humanist tolerance.

The West continues itself to generate a range of secular fundamentalisms, ones without the horror effects of 20th-century totalitarianism. There are fanatical greenies who believe that to damage one tree is to poison the Garden of Eden. There is a virulent new anti-Americanism. There is self-righteous hatred of one political leader or another, imagining he or she will bring on social corruption, even the end of the world, if he or she remains in power.

Fundamentalism today is one of humanism's pathologies. It is a creation of the West and will continue as long as we fail to rediscover from within our own culture persuasive answers to the central metaphysical questions. Without such answers we humans cannot live.  ♦

NATIONAL DEVELOPMENT WAS high on the Commonwealth agenda in the 1950s and 1960s, leading to such projects as the Snowy Mountains Hydroelectric Scheme. It is no coincidence that this was a period of optimism and high morale in the country. But vision for the long-term well-being of the nation has been notably lacking in recent decades.