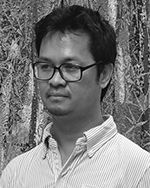 ko ko thett is a poet by choice and a Burmese by chance. In between, he is a poetry translator, editor and anthologist of contemporary Burmese poetry. His first anthology, Bones will Crow: 15 Contemporary Burmese Poets, was published by the Northern Illinois University Press in 2013. He lives and works in Belgium and writes in both Burmese and English. His collection the burden of being burmese is forthcoming from Zephyr in the autumn of 2015.